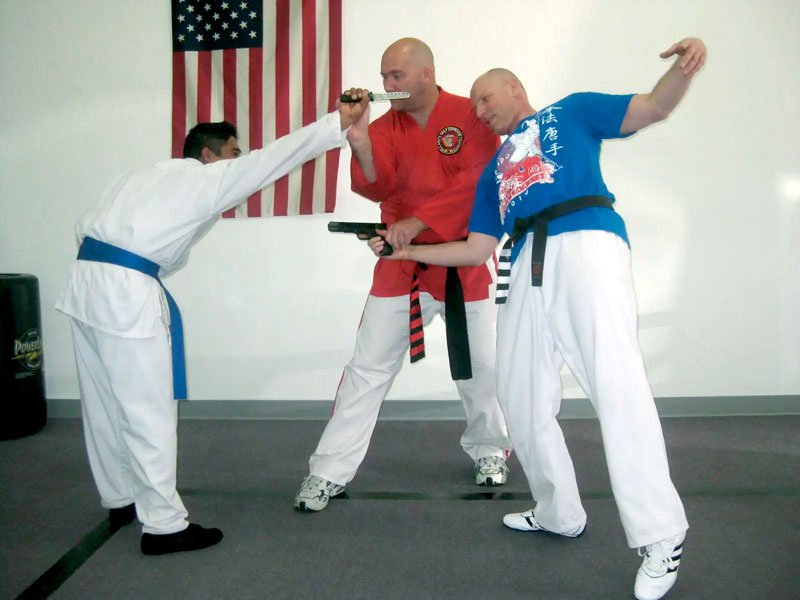 This is one of my favorite topics. So I will jump in, head first!

This is the simplest weapon to defend against (within reason). With the gun, you need to be out of the line of sight of the barrel. Granted, you need various tools like – misdirection, retention, disarming, countering, striking, kicking, breaking, taking down, and a few other choice skills.

When you are close or at a kicking distance, you can more easily defend yourself, although scary and potentially loud.

Distance is not your friend. The further away, the more difficult it will be. Closer is preferred unless you are further away and you can get behind something solid or run away and stay out of the line of sight.

When training, never give the gun back immediately. Do not imbed this habit of suffering the fate of others that did the same thing.

THE CLUB: Typically, a stick is anywhere from about 12 to 30 inches. What sets this apart from the bat is that it is a one-handed attack. So because of that, there is less body commitment.
Because most people are right-handed, we will assume all are right attacking people, only to keep things simple.
So usual attacks are side, overhead, poking, and the backswing. That is the order of common attacks.
Dealing with the side, overhead, and backswing is simple. The closer you are, the safer you are. If you start too close, then your attacker is going to take a crack at you. I recommend keeping a distance that is just out of their range of attack.
Force them to commit to moving or step forward to attack. It is at this time you move forward. Doing this allows you to not only crowd control your opponent, but if you miss the block/deflection, only their arm may hit you and not the stick. Just like baseball … if the ball hits you, it drops.
If it hits a few inches up from your grip, the ball travels a little bit of distance.
If it hits halfway up the bat, you are getting greater distance.
If you hit near the end of the bat, you got yourself a home run !!
The same rules apply here as any other weapon. Once you have blocked/redirected/etc then you retain/disarm and strike/kick/break them. A complete disarm is always preferred.

Similar to the stick, but what is different is that they are using a heavier object. This will require two hands, in order to control the weight, torque, and power. Also, because both hands are trying to maintain control, the whole body will be committed. Same types of attacks as the club. Again, closer is safer!

For both club and bat, if you have the option to keep a good distance, then run, place objects between you and them. The techniques are for when defending yourself is the last alternative. NEVER STEP BACK TO BLOCK!

THE KNIFE: The most deadly, in my opinion.

It does not break easily.

It does not run out of bullets.

It is easy to throw.

It maintains its shape and structure before it needs sharpening.

It is easy to sharpen with the right tool or a simple piece of pottery.

It is easy to conceal.

Make no mistake, a knife is nasty and deadly.

There is an argument that frequently occurs between martial arts instructors and police officers about this weapon, and they are both right. You only need perspective to start.

The Martial Artist usually tells you to keep your distance, similar to the club, just out of range. Then when they attack, you move to create a safe buffer (not usually closer as you need to be much more refined and skilled), lean enough that if you miss your block that you still won’t get cut or stabbed, then block/deflect/etc and either disarm or get immediate retention. Then next is devastating your opponent immediately. There is more but you get the point.

The Police Officer will respond by often getting in close and controlling the attacking arm, breaking the arm, controlling the shoulder, taking them down, etc. Then, finishing them with control, if the circumstances allow.

Usually, they have drawn their gun, so the above is an example of the officer caught off guard.

Both sides are right. When an average person is being attacked, it is more of mugging and the bad guy wants something. If an officer is being attacked, I assure you, there is no intention to take his lunch money. An officer being attacked is having deadly force being used against him and he (if properly trained) will act in kind.

I know a few people will argue some aspects above. That is fine, but common sense and a simple understanding of the history of attacks is all you need to see what I am saying to be true.

Do not be a tough guy in any situation. Avoid if you can. The last thing you want is to be a tough guy that tries to grapple the bad guy to the ground, then he pulls a knife you don't see and then ... well it will be too late.